One of the things I like most about personal & professional social networks is the context that they provide around communication streams.  We’re able to target our messages to specific audiences without needing to remember (or capture) each and every individual, and we also have more control over what messages come to us from other people. (Let’s take Facebook, for instance: I’m a member of a Dave Matthews Band (DMB) group in Facebook, and when I have something to say or share that’s DMB-related, I post to that group rather than to my profile (most of the time). Why? Because my target audience is entirely contained in that group, whereas posting to my Facebook profile would push my DMB news to all of my Facebook friends, most of whom have no interest in viewing or participating in my DMB ridiculousness. So, quick lesson = context is key!)

A few weeks ago my company published a post I wrote that highlights this very concept in the professional network we use – Salesforce Chatter. In the post’s matrix we identified how someone should determine the most appropriate audience for any given Chatter post. Just like my Facebook group example, the beauty of Chatter and similar ESN tools is the ability for a single employee to find information, answers, content, and experts even if s/he doesn’t know who to ask.

…Which brings me to my point: if you are consistently @mentioning more than a few people in your posts, one of two things is happening:

The latter is not uncommon and is a significant part of what I’m paid to do every day in helping organizations develop consistent processes & streams of communication. When we see people abusing @mentions, sometimes the answer is training, sometimes the answer is adding or restructuring Chatter groups (though if it’s a 1-off conversation that may not be necessary).

I would expect that both of these reasons contribute to why people might be @mention abusers, but for now let’s assume that the first issue – contextualizing your post – is the primary reason for multiple @mentions.

In Chatter, an @mention directs a post to someone specific and, by default, notifies them via email. This can be a helpful tool in many instances, such as this one:

In this case, I saw a post in the “Ideas Central” group and realized that Bailey wasn’t a member of that group, so I used an @mention to flag the post for Bailey. As a result, Noelle’s post is adding value for someone she doesn’t even know because of the great use of an @mention to Bailey.
On the other hand, improper use of @mentions often means that you’re not finding the appropriate context for your post. Take this, for example: 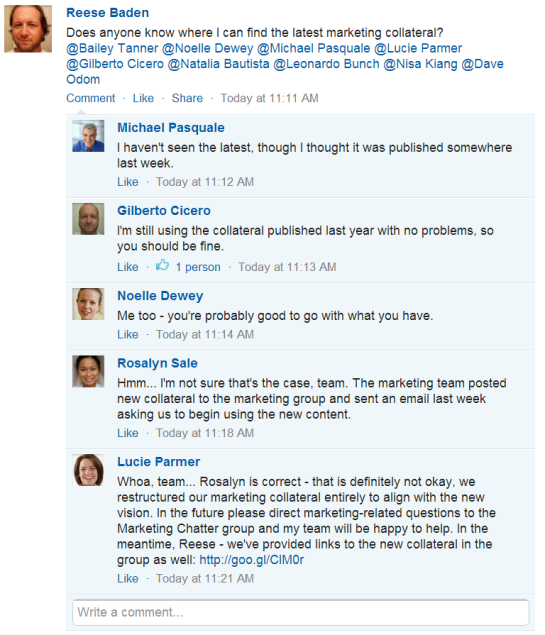 We can see that Reese posted a marketing question to his profile – rather than the Marketing group – and simply @mentioned several people that he knows. In doing so, not only did he provide zero context but more importantly he didn’t reach the audience he needed. If it weren’t for the coincidental timing of Lucie seeing this thread, an inaccurate conclusion may have caused widespread & improper use of their marketing collateral.
Of course, there are occasions where multiple @mentions make sense, but more often than not, you shouldn’t need to use them consistently en masse – if you do, it’s no different then sending an e-mail to everyone in the company because you don’t know who to ask. That’s a problem Chatter is supposed to help solve.

Unsure if you’re an @mention abuser? Double check your post placement first (use the matrix as a guide!). If it turns out that you are properly contextualizing your post but not receiving the answers you need, hit me up and we can walk through potential strategies to address your organization’s Chatter environment and communication structures. 8^)

What I Write About:

It's all very exciting, isn't it?

Baking Adventures in the Nation's Capital

Adventures in the Cloud

Twice Around the Block

Where everything is better the second time around.

a collection of my experiences working with Salesforce and the Force.com platform

Sharing experiences and telling stories through photography/technology/coffee. Also a place of everything 33.

Vertical Coder
From the desk of SalesforceQueen

"There is nothing new except what has been forgotten"

A force behind the force

Just another salesforce.com junkie blogging about all things salesforce

It's all very exciting, isn't it?